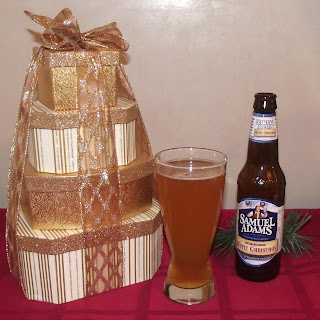 Boston Beer Company (aka, Sam Adams) is a regular brewer in The Twelve Beers of Christmas.  But this time we remembered not to review the Winter Lager again as we did in 2010 and 2011.  Oops.  :)

Walking through Sam's Club back around Thanksgiving, I ran across a case of Samuel Adams Winter Classics.  Along with the flagship Boston Lager, five other delicious varieties are packed into that box.  The White Christmas is new to the Sam Adams line up.

The glass filled with a slightly hazy but deep gold beer that formed a small white head.  The haze is common to wheat beers (which witbier is a variety of).  The head quickly dissipated to a light ring.

The scent is all fruit and spice.   Bananas and grapefruit mixed with cinnamon, pepper, and big dose of coriander.   The carbonation is aggressive and crisp, leaving a tingle on the tongue and a medium-bodied mouthful.

I know I say this sort of thing a lot, but I really enjoyed this beer.  The best thing is that I have three more in the refrigerator along with some Sam Adams Chocolate Bock, Holiday Porter, Old Fezziwig Ale, and, yes, Winter Lager.  Happy New Year to me and the rest of the guys!

Aaron & Brandon tasted strong nutmeg with a hint of citrus.  But they didn't feel there was any cinnamon in the flavor.