For the Eleventh Beer of Christmas, we warmed up this winter night with another seasonal brew. 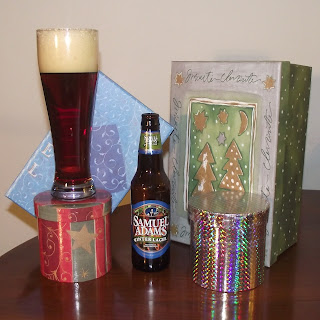 Boston Beer, more commonly called Sam Adams, is undoubtedly the most famous of the craft brewers. They do a great job of managing volume with quality.

The Winter Lager, their winter seasonal beer, fills a glass with a deep, rich copper brew that forms a think head which slowly tapers off to a light skimming of foam. While the lacing is minimal, the aroma is strong and inviting. A moderate hoppy scent combines with spicy undertones of cinnamon, ginger, and cloves.

The spices come out in the taste along with sweet malt in the medium-full bodied beer. The malt leaves a slightly sticky film behind, almost like after eating cotton candy. Of course, it tastes nothing like cotton candy.

Sam Adams is a long time favorite of mine. I’ve had nearly every one of their brews except for a few hard to find ones such as the Utopias. But I’ll keep looking for those.