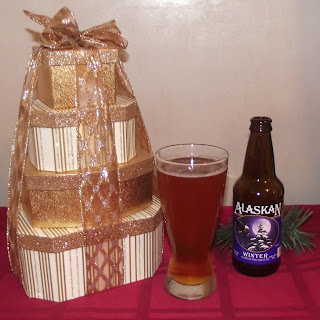 For the Eighth Beer of Christmas, we went north to Alaska, north because the rush is on.  Of course, our gold was a little different than Johnny Horton's.


Alaskan is another brewer that has recently made its presence known on my local shelves.  I've had their White and Amber brews. Their short, color coded bottles definitely stand out on the shelves.

The Winter Ale, brewed with spruce tips, pours up an amber gold with a small head.  Now, the photo doesn't really represent the head well. I had camera issues so the head was nearly gone by the time I snapped the photo.  The head, little though it was, dissipated quickly and the low carbonation did nothing to support it.

The aroma is nice.  Sweet with a touch of bread and peach.  It's very mild, though, and took some focused inhaling.

Given the style, I expected a bit more body. The beer feels thin.  I think it's probably the low carbonation.  I like the taste.  Lightly sweet with a touch of bubblegum and lemony hops.  The spruce is also evident.  Not that I've eaten a lot of spruce, but there's a unique flavor on the sides of my tongue and I have to label it as "spruce."  I was surprised that even with the fairly high alcohol content, about like a Winter Warmer, the beer lacked the warming sensation I assumed it would have.

Overall this is a nice beer, but not one I'm likely to go after on a regular basis. Of course, I wouldn't turn it down if it was handed to me.

Aaron & Brandon didn't think it had much carbonation and Brandon added that it tasted like a tree.


Aaron: 5
Brandon: 7
Wyatt: (Still out partying for New Years? We might need to send a search party.)
Tracy: 6


Stats
Brewer: Alaskan Brewing Company
Location: Juneau, AK
Website: http://www.AlaskanBeer.com
Style: English Olde Ale
Alcohol Content: 6.4% ABV
Interesting Note: Alaskan put a fair amount of thought and effort into their brewing system to establish a sustainable and "green" system.  I could write all about their efforts to capture and reuse carbon dioxide from fermentation, spent grain fueled grain dryer, and mash filter press.  But they're already done a nice job of that here: http://www.alaskanbeer.com/our-brewery/sustainable-brewing/brewhouse-innovation.html.  Give it a read.
at 11:35 PM