For the Eighth Beer of Christmas, we picked a beer from another of our favorite brewers. 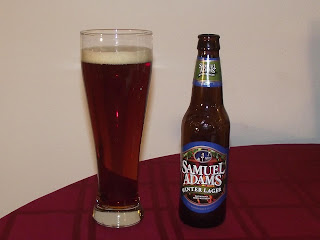 Sam Adams Boston Lager, the company’s flagship beer, was one of my early ventures outside the Budweiser/Coors world. It’s remained one of my favorites.

Their Winter Lager poured to a nice amber brown with a medium head retention. Like Anchor Brewing’s Christmas Ale that we drank as the First Beer of Christmas, this lager is spiced for the holidays. Although it isn’t as strongly spiced as the Christmas Ale, the cinnamon and ginger come through clearly along with a touch of hops.

The spices and hops are also predominant in the taste, along with the sweetness of toasted caramel malt. The sweet, spice, bitter, and carbonation are well balanced with none of them overpowering the others in this Boston medley. As lagers are wont to be, the beer is smooth, although a little sharp from the spices rather than creamy as most lagers I’ve had tend to be.

Even though the weight is best described as medium, it’s still a filling beer. I was three and out with this beer tonight, as I have been with most of the heavier beers. This is opposed to the nine (yes, 9) Lawnmowers I drank for the Second Beer of Christmas. I’m telling you, those Lawnmowers go down like Gatorade.

Before spring sneaks up, run out and grab yourself a 12-pack, curl up on the couch with someone special, and if you get past three, plan on falling asleep.