For the Tenth Beer of Christmas, we (s)tumbled upon a seasonal classic. 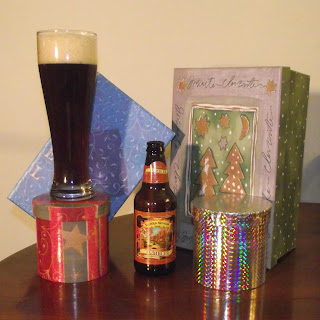 I first came across Tumbler in a hotel bar at a conference a few months ago.  It was the perfect beer for a cold winter night in a mountain resort.

A beautiful, walnut furniture brown, the beer forms a thick head that leaves a chunk lacing on the glass and retains a light foamy cap down to the very last drop.   The aroma is sweet with hints of toasted grains and nuts.   A hoppy touch lingers in the background but is not as prominent as some other brown ales (especially English ones) that I’ve tried.

Despite the rich head of foam that grew in the pouring, the carbonation is very mild.  The beer doesn’t feel flat, but it lacks the effervescence that previous the beers this year have had.  This isn’t bad.  Not by any stretch of the term.  Just an observation.  Just a little variety … and variety is good.  Otherwise this blog might be the Twelve Bud Lights of Christmas.  “Tonight’s Bud Light is just like last night’s.  Although this can was dented when I dropped the 30-pack in the parking lot at Wal-Mart.”

The taste brings on bitter chocolates, a brown sugar-esque sweetness, and roasted malt.  As with the aroma, the hops are there, but are subdued.  The medium body balances all of the above with a dry finish.

This is a great fall beer and I will likely start mentioning that I’m ready for fall in May or June because I know that fall brings out the Tumbler.  Grab some of these for a night around the fire place or sitting on the back porch under a blanket.

Stats
Brewer: Sierra Nevada Brewing Company
Location: Chico, CA
Website: http://www.SierraNevada.com
Style: American Brown Ale
Alcohol Content: 5.5% ABV
Interesting Note: Sierra Nevada’s Pale Ale is the second highest selling craft beer in the United States (Sam Adam’s Boston Lager being #1). The brewery is the 6th largest brewer in the U.S. and the 2nd largest craft brewer. And all this is accomplished while also being environmentally friendly. They were awarded “Green Business of the Year” in 2010 by the U.S. EPA for their practices in sustainability.
at 10:23 PM