Apparently we got a little excited about New Year’s Day and got our beers out of order.  Here’s #8 in place of last night’s #9. 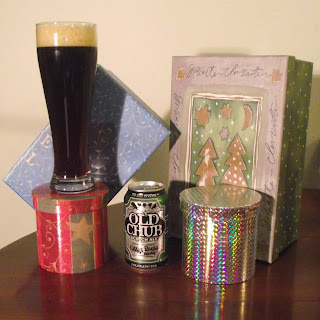 For the Eighth Beer of Christmas, we tried something strange.  A canned craft beer.

I was about to pass by this when Aubrey’s friend at World Market suggested it.  I was skeptical.  Every quality beer I’ve had has come from a keg or bottle.  Cans are for Coors, Budweiser, and other mass produced beers.  But Oskar Blues’ Old Chub puts those to shame and plants a new flag for quality canned beers.  (See the interesting note below for more canned goodness info.

Old Chub fills a glass with a deep brown liquid which forms a medium-thick, cream colored head.  It holds for a long time but eventually disappears complete.  But the aroma … wow.   It wafts several feet out of the glass with chocolate, malt, and hints of smokey wood.  As I poured out the can, I was still doubtful that the beer would be good.  But this beer called out to be consumed.  I had to hold myself at bay while taking the photos (I’m not a great photographer … each night it takes me 3 or 4 shots to get one I like).

This Scotch Ale fills out a medium body with a creamy, smooth feel.  The taste brings the previously mentioned chocolate (maybe a semi-sweet, not milk chocolate) and malt to life.  A light coffee taste with a touch of spice compliments the overall character of the beer.  At 8% ABV, this one sneaks up on you, too.  But it’s very filling so you won’t get too many in you before start feeling like it’s an hour after lunch on Thanksgiving Day.

This was a great beer.  Please, do not drink this out of the can. Pour it into a glass so you can get full effect.

As a side note, I love that they included references to “So I Married an Axe Murderer” on the can.

Stats
Brewer: Oskar Blues Grill & Brewery
Location: Lyons, CO
Website: http://www.OskarBlues.com
Style: Scotch Ale
Alcohol Content: 8.0% ABV
Interesting Note: Craft beer in a can? I know. Kind of bizarre. But Oskar Blues launched their “Canned Beer Apocalypse” in 2002 by starting with a hand canning their brews with a machine that sealed one can at a time. To me, beer in a can is synonymous with Coors/Budweiser (which I drank plenty of before learning better). But this puts a new (and tasty) spin on this bottle drinker’s view. Oskar Blues, I salute you! Can On!
at 10:00 PM