For the Ninth Beer of Christmas, we combined beer with another of my favorite ingredients: agave (aka … the source of Sammy Hagar’s Cabo Wabo Tequila). 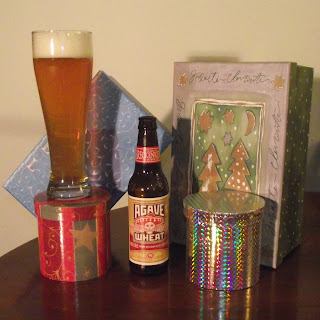 Before we get started, let’s disclose a little fact.  The agave in this is (agave salmiana) not quite the same as the agave that is used in tequila (agave tequilana or agave azul).  But let’s not worry too much about that …

We’ve already had one wheat beer (see Style below) on the list this Christmas, Napa Smith’s Wheat Beer.  The nice thing about wheat (IMHO) is that it’s a nice pallet to color upon.  Some of my homebrew friends have made wheats with peach, raspberry, and even jalapenos.  It makes for a nice backdrop for an additional flavoring.

The difference between this wheat and Napa Smith’s is that Napa went with a straight forward what while Breckenridge experimented a little.  And their experimentation paid off.

The beer pours out in an attractive hazy golden.  The head builds up to a medium height and rapidly dissipates.  But it sheds an enticing floral smell that’s laced with lemon and what I can only describe as a “backyard sweetness.”  I’m going to call it honeysuckle.  When I was young, my mom had two giant honeysuckle plants in her backyard.  At the height of summer, the yard smelled so good.  That’s what this beer brings to the table.

Now, the taste is less exciting than the smell, but it’s still very good.  The wheat base comes through along with a light fruit zest that seems to be from a combination of melon and lemon.  And, of course, there’s an extra layer of sweet from the agave. Hops plays little to no part in this brew’s palate.

Definitely a summer backyard BBQ beer.  This would go great with hot wings on the grill, basketball on the driveway, and the smell of freshly cut grass wafting through the air.

Stats
Brewer: Breckenridge Brewery
Location: Denver, CO
Website: http://www.BreckenridgeBrewery.com
Style: Wheat Beer
Alcohol Content: 4.2% ABV
Interesting Note: Chalk up another one for the home brewers. In 1980, Breckenridge founder Richard Squire just wanted to ski and drink great beer. Skiing was easy in Breckenridge, but great beer was in short supply so he began home brewing his own. Unfortunately (not really), his beers were so good that he was soon spending more time brewing than skiing.
at 10:15 PM