For the Twelfth Beer of Christmas, we celebrated in style. 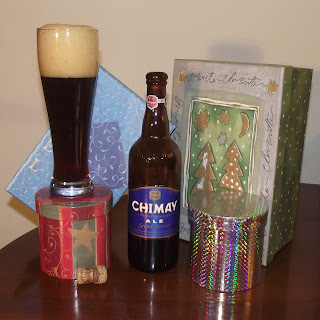 Unlike some of the other beers, I’ve had this one before. Several times.  Chimay Grande Réserve has long been a celebratory beer around my house.  With every new job, I buy a bottle of Chimay.

Accomplish something I’m proud of, I buy a bottle.  When Aubrey turned 21 and again when she graduated, I bought her a bottle.  And so, to celebrate the final night we bought another.

I won’t bother raving about how great this beer is.  Obviously it’s something special.   At least to me.  Instead, I’ll just tell you about it as I have the others.

It pours out a mahogany brown.  Translucent but not transparent.  The head forms rapidly and nearly overflowed the glass as I was getting ready to take the photo.  But it dissipates rapidly to a light frosting with low lacing.

The yeast and alcohol come through in the flavor along with roasted malt, raisins, and a smokey wood.  The carbonation is crisp and light.  A nice compliment to the silky smooth, medium body.

At nearly $13 a bottle (for 750 ml), this is probably not what you want for your staple beer (mine is Shiner Bock).  But I highly recommend that you find a reason to celebrate and grab a bottle of Chimay Grande Réserve. Maybe just celebrate that it’s Thursday!

Stats
Brewer: Bières de Chimay
Location: Belgium
Website: http://www.Chimay.com
Style: Strong Ale
Alcohol Content: 9.0% ABV
Interesting Note: Grande Réserve is a Trappist beer. These are brewed only by monks in Trappist monasteries. Of the 174 monasteries in the world, only 7 produce beer and are authorized to use the “Authentic Trappist Product” logo.
at 9:54 PM