For the Seventh Beer of Christmas, we continue our trek east with a stop in Blanco, TX, for a beer that would not disappoint if it were poured from a coffee pot (I’ll have to see what they think about this at the office). 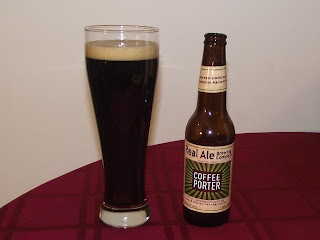 Pouring the bottle into the glass did not result in a waft of aroma like some of the other beers, including our Sierra Nevada Porter from two nights ago. The scent is more subtle and understated. You nearly have to get your nose into the glass. I think the thin head retention might have something to do with that. During this experiment, I’ve found that the beers that poured with thick head have a more robust scent.

But once you close, Real Ale’s Coffee Porter gives off a smell that combines rich, roasted coffee with bitter chocolate. There’s a light suggestion of vanilla as well as a hint of the strong alcohol content (6.3% ABV).

As you probably expected, from both the name and the smell, the taste is strongly influenced by the coffee used in brewing this beer. Although the strong alcohol content comes through, there’s a smoothness to the brew. I drink my coffee black (unless I’m at Starbucks and then I have to cut the strength with sugar and half & half … or if I’m at a convenience store, where I have to disguise the flavor with half & half and sugar). And I like the sharp, astringent taste of the coffee. But this Coffee Porter has a creamy taste, like a coffee cut with half & half (definitely not cut with the fake stuff).

This was tasty beer that gave me flashbacks to my first (heavenly) sip of coffee that I have each morning at work.

Aubrey says, “It’s decent, but I’d rather have a coke.”

And tonight we have special guest commentators Betty and Lisa.  Betty says, “It tastes like coffee.”  However, I think she would have preferred the coffee.  And Lisa says, “It’s good.”