For the Ninth Beer of Christmas, we hopped the pond again to visit the most famous brewery in Ireland. 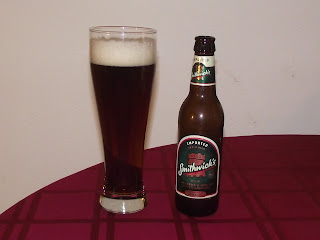 At least I think Guinness is the most famous brewery in Ireland. It’s the only one I can name. Before we get into tonight’s beer, let’s start with a side note … I don’t like Guinness Stout, the brewery’s flagship. In my experience, it’s a love it or leave it drink, and I prefer to leave it. Every so often I try another one (I did on New Year’s Eve), and yet the result is always the same. Consequently, I didn’t have high hopes for this brew. But my low expectations were without merit.

A nice copper-brown, the Smithwick’s kept a nice head and filled the space around the glass with a malty, toffee aroma. A shade of hops adds complexity to the scent. It’s a nice smelling beer. It doesn’t scream “drink me,” but it’s inviting.

The flavor is equally hospitable to the mouth. It’s a medium body beer with a lightly sweet taste. The malt and hops come through and the drink finishes dry.

Smithwick’s is not a great beer, but I was pleasantly surprised given my non-Guinness bias. I’m not likely to run out a buy a 6-pack again any time soon, but I wouldn’t turn one down if it was offered to me. And if I ever wander into an Irish pub, it will probably be first on the list. Yes, if I find a good Irish pub (I’ll have to leave West Texas for that), there will be a list. I’ll probably even have another Guinness Stout (and I still won’t like it).

Stats
Brewer: Smithwick’s (Guinness)
Location: Dublin, Ireland
Website: http://www.Smithwicks.ie and http://www.Guinness.com
Style: Irish Red Ale (Pale Ale)
Alcohol Content: 4.5% ABV
Interesting Note: Smithwick’s is purported to be Ireland’s oldest beer, being brewed since 1710 by John Smithwick. In 1965, Guinness purchased a controlling share in the Smithwick brewery. Up to that time, the brewery had been under the control of the Smithwick family. And at that time, This year, the beer celebrates it’s 300th anniversary.
at 9:26 PM