For the Fifth Beer of Christmas, we went back to the West Coast for a little California Dreamin’. 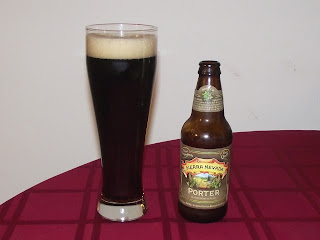 After the light to medium beers we’d have the last three nights, I decided it was time to come back in black (I know, I’m mixing my musical genres … just go with it) and the nearly opaque, deep brown/black color of this particular porter was a great selection.

Pouring the glass resulted in a rich aroma, like deep loamy soil mixed with caramel, coffee, and a hint of vanilla. Good head retention from the light tan foam that held up during the photo session and remained as a thin wisp through the entire glass … and foamed up again nicely for the second glass.

Now, I’m normally a “drink it from the bottle” guy (“longneck bottle, let go of my hand”), but I wanted to take pictures of them in the glass so you could see the color of each beer. One of the side benefits of this has been enjoying the rich aromas. The Sierra Nevada Porter has been the best smelling beer of the twelve (so far). As I tipped the glass for each drink, I took a big whiff just to revel in the scent. When you buy this beer (and you should), it deserves a glass.

The taste starts off just a little sweet and finishes with a bittersweet chocolate flavor. The dark, roasted malt comes through strong between the start and finish for a warm and friendly drink (despite the beer’s cool 38° F temperature when coming from my refrigerator). The lush, thick taste translates to a rather filling beer. I finished three and felt comfortably full … like Thanksgiving before I hit the desserts and move on to uncomfortable and sleepy.

Speaking of desserts, Aubrey thinks this beer would go great with cheesecake.