For the Sixth Beer of Christmas, we stopped in Colorado for a Belgian Dubbel (okay … obviously I’m not going out of town, this was another trip to World Market … I should get them to sponsor the Twelve Beers of Christmas). 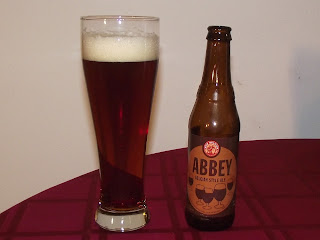 New Belgium Brewing is the creator of one of my favorite beers, 1554, a Belgium Dark Ale. Even though Abbey has been around for a while, I hadn’t noticed the bottles on the shelf until we started shopping for our Twelve Beers.  I was excited to see this addition to the New Belgium lineup since Fat Tire, Skinny Dip, 2° Below, and especially 1554 are in regular rotation at my house.

The beer began with a strongly spiced smell, cloves, maybe coriander, and a suggestion of pepper, with a light touch of alcohol peaking through.  Even though it’s not a Christmas beer, per se, it had an aroma that whispered “Christmas” into my nose.  Hmm … that’s an odd statement.  Anyway, it’s a pleasant and inviting scent.

The taste carries a touch of the spice that came through in the smell along with a large dose of yeast, almost like rising bread dough.  With a medium body and a light hint of carbonation, the Abbey finishes with a warming caress of alcohol.  Yes, that 7% ABV actually does come through in the taste.

Overall, I enjoyed New Belgium’s Abbey, but I doubt I buy this one very often.  For me, 1554 is just too good to pass up when I mosey past the New Belgium section of the store.

Stats
Brewer: New Belgium Brewing
Location: Fort Collins, CO
Website: http://www.NewBelgium.com
Style: Dubbel
Alcohol Content: 7.0% ABV
Interesting Note: If you get a chance, read through their employee perks (http://www.newbelgium.com/Files/nbb_employee_perks.pdf).  I’ve heard people say that New Belgium is one of those few companies with a culture that combines hard work with a love of the job and a lot of fun.  Their “perks” highlight this with things like:
Oh … and I hear the brewery tour is really cool.  I haven’t been, but if you get close to Ft. Collins, stop by for the tour and let me know how it is.
at 9:51 PM