The Fourth Beer of Christmas went to the dogs … Flying Dog Brewery. 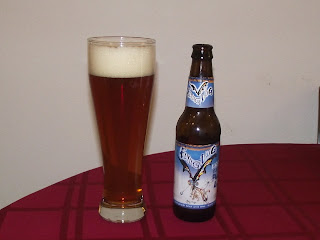 Last night we drank an English Pale Ale. I was a little concerned that Pale Ales might not be my kind of brew. I know I’ve had a few over the years, but I don’t remember much about them. Maybe I drank them after a some shots of tequila. Hmm … the Twelve Tequilas of Christmas … maybe that’s next year’s project.

Anyway, back to beer. So I was a little concerned about this brew but I forged ahead anyway and poured my glass for the photo. It was a nice light brown (or deep gold, depending on your arrangement of cone cells). I had a second bottle ready to refresh the head on the beer as I took the pictures. The last two nights, the head quickly wasted away to nothing. The photo in this post was the 5th photo I took. And I took it after stopping to stare at the beer for a second, slightly amazed by the head retention.

Then it was time to tip the glass.

Just as quickly as her comment last night, tonight Aubrey said, “Soooo much better than the last one.” And I agreed.

The beer had a medium body and a fruity flavor that was more citrus than apple. Which is good news because I do like citrus. The dose of hops (Northern Brewer and Cascade) comes through strong including a bitter finish. I took several drinks and tried to get a handle on my feelings for the aftertaste.  Definitely bitter, and definitely strong.  But unlike last night’s un-Holy (Grail) aftertaste, I enjoyed tonight’s aftertaste and found myself pausing after every drink to savor it.

The best beer I’ve ever had? No. My favorite beer so far during this Twelve Beers of Christmas? Yes. I know we’re only four beers in and there are some strong contenders in the days ahead. But this one will grace my refrigerator again.

Stats
Brewer: Flying Dog Brewery
Location: Frederick, MD
Website: http://www.FlyingDogAles.com
Style: American Pale Ale
Alcohol Content: 5.5% ABV
Interesting Note: I laughed and laughed when I went to their website. There’s a link for “Free Shit.” And their 20th Anniversary beer is named “Raging Bitch.” When I have more time, I’ll go back and look through the site more thoroughly.
at 10:42 PM