For the Second Beer of Christmas, we jumped ahead six months to a beer whose name screams “SUMMER!” Saint Arnold’s Fancy Lawnmower. 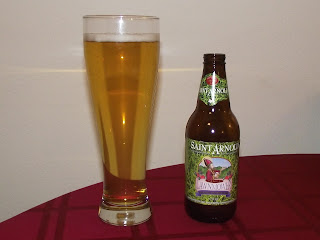 Before buying a six-pack, I was told that this beer “tastes just like freshly cut grass smells.” That comment had always made me a little leery of buying this beer. I like the way my lawn smells after I mow it, but I’m not sure I’d want a glass of that. It turns out that it tastes nothing like freshly cut grass smells. Doesn’t even remind me of it (see below for info on the naming of this brew). But this coming summer, after spending a day mowing the lawn or repairing the fence, this is the kind of beer I’m going to reach for.

Light bodied, with a clean, crisp finish, this beer is as refreshing as it is clear (if you’re not sure how clear it is, check out the full size picture, you can see the texture of my living room wall through the glass). It’s like the Gatorade or iced tea of beers: thirst quenching and refreshing, light and drinkable.
However, like Gatorade or iced tea, it doesn’t stand out much. Neither the taste nor aroma are particularly remarkable. Not bland, but not remarkable. Now don’t get me wrong, this summer I will probably be twisting the top off one of these on a Saturday after mowing the yard because my usual post-mowing fare, a Shiner Blonde, is just a bit too heavy. But cold, clean, and light bodied, these just slide down.

Fancy Lawnmower will never be my staple beer, but it might just be a thirst quencher that finds a regular home in my refrigerator during the summer months.

Aubrey’s thinks it’s a tasty brew, light and refreshing, but her favorite part of the beer (which applies to any Saint Arnold’s beer) is the witty comments printed on the inside of the caps: “Wait no lager!”, “Grin & beer it!”, “Be hoppy”, etc. She’s looking forward to our Tour of Texas Breweries this summer when we’ll visit Saint Arnold’s.

Stats
Brewer: Saint Arnold Brewing Company
Location: Houston, TX
Website: http://www.SaintArnold.com
Style: Kölsch
Alcohol Content: 4.9% ABV
Interesting Note: After creating the brew, they had five possible names for it: Select, Blonde, Kölsch, Golden and Fancy Lawnmower. They took a survey of people and asked people to rank the names on a scale of one to five. If they’d averaged the scores, Golden would have won. Fancy Lawnmower got lots of 1s and lots of 5s, but regardless of how it was rated, all the survey participants wanted to discuss that name. And so it stuck.
at 9:31 PM