For the First Beer of Christmas,
Anchor Brewing gave to us,
Their 36th holiday ale! 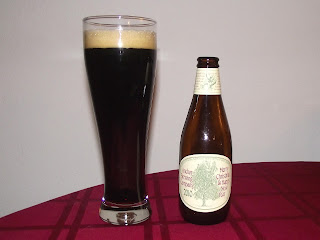 For Christmas Day’s beer, we had to go with a Christmas brew. What could be better than a bottle that wished us a Merry Christmas (and a Happy New Year) right on the label?
Anchor Brewing Company has a reputation for brewing great beers, with Anchor Steam being the flagship of this nautical themed company. I’ve had plenty of Anchor Steams, but never ventured into their other offerings until now. Not for any particular reason, though. I just never got around to them. But after drinking tonight’s beer, I’m going to have to give some of their others a try … and before next year’s Twelve Beers of Christmas.

While pouring it into the glass, two things struck me. First was the rich aroma. It reminded of my childhood when we kept a real Christmas tree in the house and my grandmother mulled spices in apple cider. It was so strong at first that I thought the taste might be overwhelming. But the smell mellowed quickly to a comfortable and inviting aroma.

The second thing was the gorgeously dark color. I do love a deep brown, yet translucent, color in a beer. Held up to the light, the beer reminded me of a deep mahogany dining table that we used to own. It was a beautiful table and this is a beautiful beer. When poured, the head frothed up into a light caramel color.

The taste matched the aroma. Sweet and smokey. Spicy (holiday spicy, not jalapeno spicy) and crisp. And an hoppy twang to end each drink. Given the deep color, I expected a heavier beer, but I really enjoyed the lighter than expected feel. That strong a flavor mixed with a sweet, heavy beer would have been more than I wanted. But the Christmas Ale’s medium body was a good match for the strong flavor and intense hoppiness. (Is that a word? Spell check doesn’t like it.)

Overall, a nice change a pace that I think the Christmas-in-a-bottle feel would be a great addition to any holiday gathering. It’s certainly not my favorite beer of all time, or even in the top 10, but it’s a nice beer that murmurs “Merry Christmas” while you drink it.

Stats
Brewer: Anchor Brewing Company
Location: San Francisco, CA
Website: http://www.AnchorBrewing.com
Style: Winter Warmer
Alcohol Content: 5.5% ABV
Interesting Note: This is the 36th Christmas Ale from Anchor Brewing. Each year, they customize the bottle by featuring a different tree on the label. This year’s tree is the Ginkgo biloba tree. For a look back at past labels, check out http://www.anchorbrewing.com/beers/pdfs/Flyer_ChristmasAle2010.pdf.
at 10:24 PM