For the Third Beer of Christmas, we hopped the pond (by going to our local World Market) and picked up a bottle with a label that’s been intriguing me for while. 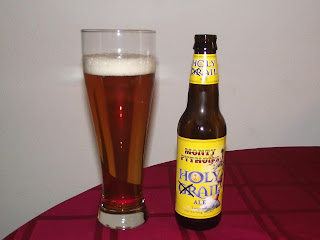 Opening the bottle there was a very faint aroma, like a light apple juice scent. The bad news is, I’m not a big fan of apple juice, so this got a quirked eyebrow from me. After taking the photo, Aubrey and I raised our glasses and drank.

For me, it was about the same. I was just glad we’d bought it at World Market where we could build our own six pack.* But as I sat down to mull over my thoughts and continued to drink, the taste grew on me … a little. The whiff of apple in the nose translated to a light apple taste and then an aftertaste that left me scraping my tongue against the roof of my mouth. The label states that the beer was “tempered over burning witches.” I’m thinking that tempering might be the cause of the aftertaste. Cut the aftertaste and this would still not be a great beer, but it would be better than it is.

For the Monty Python fan, buy the bottle and keep it capped on the shelf along with your plush killer rabbit (even Aubrey owns one).

But for everyone else, if you’re offered this beer, just say “Ni!” Yes, I really went there.

Stats
Brewer: Black Sheep Brewery
Location: Masham, North Yorkshire, England
Website: http://www.BlackSheepBrewery.com
Style: English Pale Ale
Alcohol Content: 4.7% ABV
Interesting Note: The ale was specially commissioned to commemorate the 30th anniversary of Monty Python in 1999.
* For those of you who have never visited a World Market, they have a cool feature in that you can build you own six pack. Just grab a container and mix & match your own six pack. It’s a little more expensive than buying a six pack at your local beer store, but you can try out several beers that you’re not sure of without having a refrigerator full of something you won’t drink and then you have to pawn them off on your friends (who don’t appreciate it …trust me).
at 8:29 PM