For the Thirteenth Beer of Christmas, our final night in this Brewer's Dozen Celebration, we salute the Land of Enchantment with a beer that's worthy to come from such a magically named place.

In October 2013 I visited Santa Fe, New Mexico, to attend a conference. The #2 item on my list for that trip, just below giving my presentation at said conference, was to visit the brewery that makes the magically delicious Imperial Java Stout. Yes, I know, I'm mixing geographic genres with Ireland's leprechauns with New Mexico's general air of enchantment.

Filled with a rich, cola colored brew that's capped with a thick, chocolate milk colored head of bubbles, you might think you've just poured yourself a coke float. Don't let the look fool you, this is much, much better tasting than any coke float! The head settles down and is just minimal traces across the top by the time you're halfway done. Lacing on the glass is spotty.

The aroma is a mix of roasted malts and roasted coffee beans. It's dark and rich with a bit of dark chocolate and a touch of sweet caramel to round it out. Despite being 8% ABV, there is little to no alcohol scent.

Similarly, the high alcohol content is masked by the intense flavor explosion of coffee and roasted malt. Coffee comes through at the forefront - fitting with "java" in the name - with roasted malts coming in not far behind. There's a bit of bittersweet baking chocolate in there, too. Hop flavor is minimal. Medium to full bodied with low to moderate carbonation, the drink clears the back of the tongue with a bittering that is more coffee than anything else.

The low alcohol feel and the subdued hops make me think this is more "coffee stout" than "imperial stout." However, the body and actual alcohol content tell a different story.

This is one of my all time favorite beers, which is why I chose to make it the final beer in this year's special Brewer's Dozen. If you're in Texas, New Mexico, Colorado, or planning a trip to New Mexico, you owe it to yourself to stop by Santa Fe Brewing. It will be a treat. Try the Chicken Killer Barley Wine, too. I'm not generally a barley wine fan, but they made me a believer. 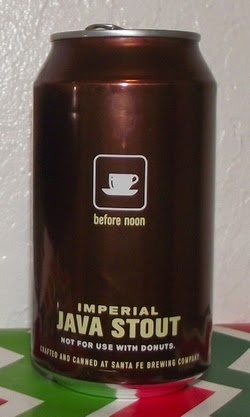 Interesting Note: Possibly because this beer is so good and so coffee flavored, the folks at Santa Fe Brewing added some helpful instructions to the can. As seen in the picture above, there's a beer mug on the can with the words "after noon." On the opposite side of the can as seen to the right, there's a coffee cup with the words "before noon." So, coffee before noon and this beer after noon. Or, maybe they mean that in the mornings you should drink this from a coffee cup so that no one realizes what you're drinking. Yeah, I think that's a pretty good plan!
at 7:04 PM