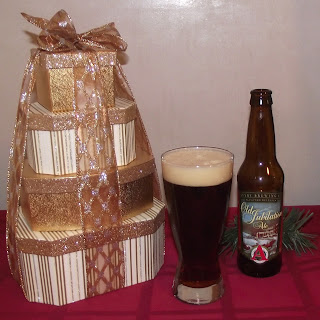 For the Tenth Beer of Christmas, we travel 26 miles to go from Arapahoe to Arapahoe.

The coppery chestnut brew forms a thick head of dense, tan bubbles. The lacing left behind on the glass as I drank was so think that it was more like icing than lacing. A moderate level of carbonation kept feeding the head so that a thin cap remained all the way to the bottom of the glass.

Hazelnuts, toffee, and rich malt dominate the aroma. Subtler tones of bread, vanilla, and alcohol slip in at random intervals.

Sweet malt and molasses comprise the basis of the taste palate. There's a very light touch of licorice that is almost masked out by a highly roasted malt bittering in the end. With the moderate carbonation, the beer comes off with a medium-full body and mouthfeel.  It's a very drinkable beer that would also be sessionable, however the high alcohol content might make that a little bit dangerous.

Aaron found it to be toasty and hoppy while Brandon remarked on the caramel flavor. Wyatt is back from his alien abduction but is still playing catchup on the beers.


Stats
Brewer: Avery Brewing Company
Location: Boulder, CO
Website: http://www.AveryBrewing.com/
Style: English Olde Ale
Alcohol Content: 8.3% ABV
Interesting Note: As noted in my previous Avery review for Hog Heaven, Avery was started by a homebrewer turned pro.  Like Deschutes and Stone, Avery has a number of their recipes posted on their website for homebrewers. Among them is the Old Jubilation Ale recipe.  I may have to give this one a try myself.  http://averybrewing.com/brewery/recipes-for-homebrewers/
at 11:38 PM