For the Third Beer of Christmas, we tried a Barley Wine (see Style below). 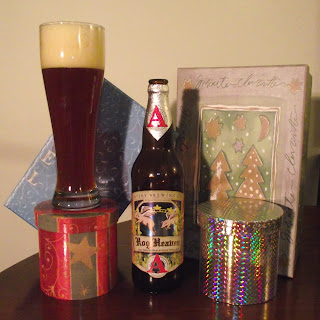 I’ve only had two other Barley Wines in my life and didn’t like either.  Although during my days of homebrewing I always wanted to try to make one.  This one came highly recommended from a clerk my daughter knows at World Market.

The Hog Heaven pours out as a dark, golden orange color with a high level of fine carbonation.  The head built quickly and the crispness of the carbonation stayed in the feel of the beer until I was well near the bottom of the glass.  Which, in all honesty, took a while.  And that’s because …

Whoa!  This beer is a handful.  Or mouthful, rather.  You might need to brace yourself for this one.
The lightly fruity citrus aroma is accompanied by a strong whiff of alcohol.  Almost like if someone a couple of feet from you opened up a bottle of Cabo Wabo Anejo Tequila and you caught a light whiff of it.  These two smells can be compared to an old west gunslinger showing you his two six-guns when you meet in the street for a gun fight.  When you taste the beer, he’s just drawn on you and fired.

The intense hop taste followed by an alcohol warming in the throat is nearly overwhelming at first.  But over 5 or 6 drinks, it became more comfortable.  Possibly because it killed my taste buds.

It reminded me of an extra strong Double IPA.  Aubrey was not a fan of this one.  But, she’s not a fan of regular IPAs, much less doubles.

Give it a try, but you might want to be prepared to share the big 22 oz. bottle.  I have a second one in my refrigerator.  Wyatt … I’m bringing this to your house to share on your next Brew Day.

Stats
Brewer: Avery Brewing Company
Location: Boulder, CO
Website: http://www.AveryBrewing.com
Style: Barley Wine
Alcohol Content: 9.2% ABV
Interesting Note: Founder Adam Avery started Avery Brewing Company in 1993 after 7 years of home brewing experience.  To my home brewing friends out there … yes, you can turn your hobby into a career!  Please consider this to be my application to be your official alpha-taster!
at 9:59 PM