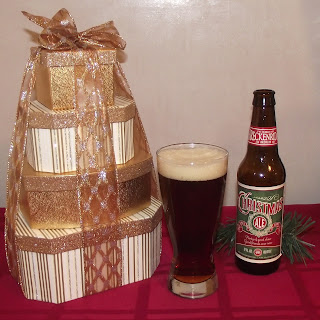 For the Fourth Beer of Christmas, we make our first of three trips into the beer brewing powerhouse of Colorado.

Breckenridge is known for good beers (I reviewed their Agave Wheat last year and enjoyed it).  This is one of their four seasonal brews, along with Pandora's Bock (I like that name) in spring, SummerBright Ale in summer, and Autumn Ale in ... wait for it ... autumn.

The Christmas Ale pours up a very attractive medium-brown ale with a low to medium head of foam that subsides to nothing fairly quickly and leaves minimal lacing.

Nutmeg, dark fruits (not quite fruitcake), sweet malt, and alcohol undertones make up the aroma when close to the glass.  But a light spiced and sweet malt scent carries several feet from the glass.

This is a very sweet beer.  It's got a heavy malt presence that masks, though not completely, the higher-than-normal alcohol content.  It's definitely a "warmer," as the style would imply.  Traditional Christmas spices back up the sweet alcohol: cinnamon, nutmeg, a touch of cloves.  It finishes with a bitter sweet burnt sugar taste.  While the alcohol content is high, the beer has a medium body and would not be terribly filling. It's definitely a session-able drink.

This beer would go very well with a roaring fire in the fireplace.  The heat of the flames warming your outsides and a Breckenridge Christmas Ale both cooling and warming your insides.

Aaron described this one as hoppy while his brother Brandon came at it from a similar vantage with "flowery."  Wyatt felt spicy was the best description.

Stats
Brewer: Breckenridge Brewery
Location: Breckenridge, CO
Website: http://www.BreckBrew.com
Style: Winter Warmer
Alcohol Content: 7.4% ABV
Interesting Note: Breckenridge was started by Richard Squire, a homebrewing ski bum (they called him a ski bum, not me) who loved good beer and, coincidentally, could make it as well. If you'd like to be a regular at the Breckenridge Brew Pub (and who wouldn't?), pull up chair and get ready to shell out some big bucks for a house.  The cheapest house I could find at www.Breck4Sale.com was $1.1 million.  According to a 2009 report from www.BreckenridgeHomes.net, the average price for a single family house was just over $1 million.  I'll have to settle for having it shipped to my local beer store.