For the Sixth Beer of Christmas, we visit the home of fine wines. 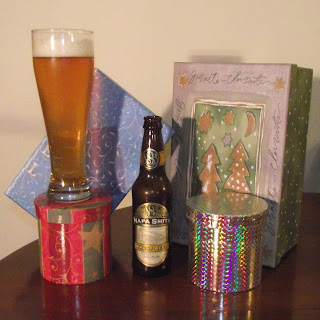 Napa Smith offers up the idea that the world renown home of wine can also be the home of great beer. I hope, for their sake, that their other brews are significantly better than the Wheat Beer which is a nice beer, but really only better than the mass market swill (Coors, Budweiser, Miller, etc).

The beer pours out in a clean, clear golden color with a nearly white head that dissolves so rapidly that I missed the first photo op and had to top off the glass and take the picture very quickly. The aroma is very faint. Pleasant, but faint. A mild wheat with a little citrus. Maybe lemon. It didn’t scream “drink me!” like the previous five beers.

The taste is clean and crisp. But a little lacking in the flavor department. A little lemon, a touch of coriander, and a bit of, no surprise, wheat.

Don’t get me wrong, this is a light bodied beer that’s easy to drink. It’s not one I’m going to grab when I want to sit back with friends or just watch some TV. But, on a hot day when I just want something to quench my thirst, this would do the trick. But, honestly, last year’s Lawnmower from Saint Arnold’s is my mowing and working outside beer. But I would definitely drink this if someone brought it over.

By the way … I have some fence to build this coming summer. Come on over and help. And if you bring some Napa Smith Wheat Beer, I’ll be happy to drink it with you!

Stats
Brewer: Napa Smith Brewery
Location: Napa, CA
Website: http://www.NapaSmithBrewery.com
Style: Wheat Beer
Alcohol Content: 4.8% ABV
Interesting Note: The Napa Smith beers only recently (July 2011) made their way to Texas. They make their home in one of the most famous wine regions in the world, Napa Valley, California.
at 10:11 PM