For the Fifth Beer of Christmas, we may have discovered the meaning of life. At least that was the translation (more or less). 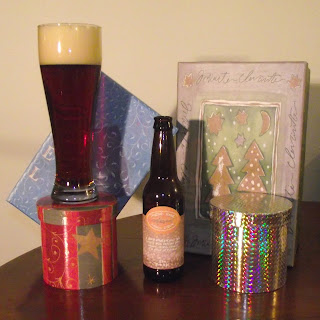 The label states that the beer is brewed with green raisins. Given that my French only extends to fries, I assumed the name had something to do with raisins. Raison = raisin? Seems plausible. But via Wikipedia (the source of all knowledge), I found out that it means “reason for existence.”

Raison D’Être frothed up a nice, fine head, but it quickly dissipated to a thin veneer. Low to no lacing on the glass. The aroma is mild but hints at sweet fruit. Not a hoppy fruit, but something like cherries and candied orange slices. There’s also a light undertone of alcohol. But given the 8.0% ABV, that’s not surprising.

The surprising part was the very mild alcohol taste and warming. With the alcohol by volume strength, I expected a stronger bite, but was pleasantly surprised. The sweet malt and raisin (not raison) flavors accompany other complex essences: cloves, smokiness, molasses, mild rum, and brown sugar. Every drink is slightly different as I try to analyze it. I think this would go well with spicy foods or steak.

Coming to the end of my third, I finally found the alcohol warming that I expected in the taste, but it’s in my cheeks and forehead. The taste is so smooth that the 8% ABV sneaks up on you.

By now your turkey leftovers should be running short. Grab a six pack of Raison D’Être and fire up the grill for some steaks.

Stats
Brewer: Dogfish Head Brewery
Location: Milton, DE
Website: http://www.Dogfish.com
Style: Belgian Strong Ale
Alcohol Content: 8.0% ABV
Interesting Note: Similar to last night, I got interested in Dogfish Head’s brews after watching the documentary Beer Wars. But unlike Stone Brewery’s beers, which I’d already sampled, I’d never had a Dogfish Head beer before seeing that movie. Founder Sam Calagione was featured prominently and was such an engaging character that I went out the next day to find some Dogfish beer.
at 10:14 PM