For the Twelfth Beer of Christmas, we wrapped up our journey east with a stop in the country that celebrates beer like none other, Germany. 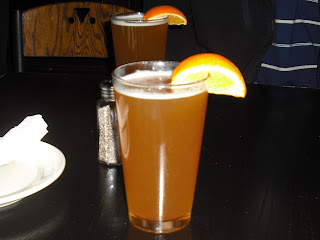 
Franziskaner’s reputation for brewing great beer made these an easy choice from Cricket’s lengthy beer menu. Unfortunately, an unexpected complication dampened the enjoyment of the brew. I know this isn’t going to surprise you, but I didn’t think about it until it was too late. Cricket’s allows smoking in the bar. I know … shocker! A bar that allows smoking. But the tobacco haze, especially from the lady at the table next to us, killed the aroma of the beer.
The Hefe-Weisse, which we drank first, came with a slice of orange (as seen in the photos), and if you got in real close you could smell the orange. Short of that, nada. By the time we got to the Dunkel, I couldn’t smell anything.

Both beers poured very cloudy as hefeweizens should. The Hefe-Weisse tasted creamy with mild carbonation and a wheaty taste. Of course, the wash of orange squeezed into the glass gave it a definite citrus taste. The hops were muted, possibly by the orange. It’s a decent beer, but I prefer Michelob Shock Top. Which is funny because Michelob is part of the Anheuser-Busch family, which is a part of the InBev family, which just happens to own the Spaten-Löwenbräu-Gruppe, which is, yes, the owner of Spaten-Franziskaner-Bräu.

The Dunkel, on the other hand, had a stronger flavor and slightly heavier body. Cloves came through along with a toasted flavor from the darker grains. Again, the hops seemed muted. This was my favorite beer of the night but fell in the lower half of the scale in comparison to the other beers we’ve had since Christmas.

Stats
Brewer: Spaten-Franziskaner-Bräu
Location: München, Germany
Website: http://www.SpatenBraeu.de
Interesting Note: While the Smithwick’s from a few nights ago comes from a brewery that is older than The United States, the Spaten-Franziskaner-Bräu brewery (under another name) was founed in 1397 … nearly 100 years before Christopher Columbus sailed to the New World.
at 11:40 PM