For the Eleventh Beer of Christmas, found a beer with an alcohol percentage that nearly matched. 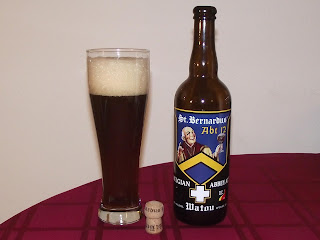 We continued our trek east from England to Belgium (and plan to do so again tomorrow with a German brew). Probably the most famous brews in Belgium are the Trappist beers. While St. Bernardus is an abbey ale, it is not a Trappist beer. But it carries on the Trappist traditions of brewing even though it comes from a commercial brewer.

Although a beautiful medium/dark brown, the beer is translucent rather than transparent as most of the other medium-ish beers have been. Most commercial beers I’ve drank have tended towards transparent except for the hefeweizens and some other heavier wheats. The head was very thick and left a lot of lacing on the glass. The smell was rich with an apple and yeast smell that reminded me of home-brewed hard cider. Strong but not unpleasant.

The taste starts off sweet with a strong dose of cloves. Partially disguised in the flavor, the alcohol sneaks past the cloves for a brandy-like sharpness and a finish that is both warming (not surprising) and smooth (surprising).

Would I drink this again? You bet. And I would recommend it time and again. But if I’m going to buy a big 750ml bottle of strong, dark ale, I prefer the true Trappist Chimay Grande Reserve.

Stats
Brewer: Brouwerij St. Bernardus (Brewery St. Bernardus)
Location: Watou, Belgium
Website: http://www.SintBernardus.be
Style: Quadrupel
Alcohol Content: 10.5% ABV
Interesting Note: The beer now known as St. Bernardus used to be a Trappist beer, but the St. Sixtus monastery decided to turn over brewing to a commercial enterprise which brewed under a “Trappist license” until 1992 when the Trappist Monasteries agreed to impose qualifications that required true “Trappisentbiers” to be brewed within a Trappist monastery.
at 8:36 PM