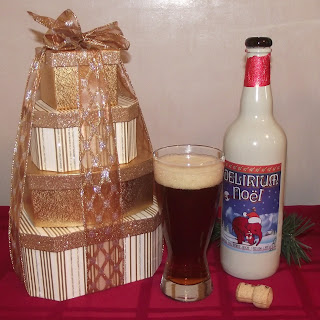 For the Twelfth Beer of Christmas, we went back to where we started the year. But we must have had a few too many because we're seeing pink elephants.

At 358 years of age, Brouwerij Huyghe has a history of numerous names, owners, and beers.  But the current incarnation is certainly the most celebrated.

Deep mahogany with a light haze, the beer forms a nice head due to strong carbonation.  However, the head doesn't stick around and quickly slips away to a thin white cap.  The lacing is minimal and leaves a fine mesh that washes away with the tilting of the glass.

The strong aroma floats free of the glass and filled the space around me.  It's a very nice mix of sweet malt with heavy splashes of spice. Mostly black pepper and cinnamon.

The flavor matched the aroma: sweet with pepper and cinnamon.  There was a yeastiness to each drink, too.  Given the very high alcohol content, 10%, the esters were much lighter than I would have believed.  It came through, of course, but more as a mildly warming aftertaste than an overarching characteristic.  Be warned, though, the alcohol is definitely there.  By the bottom of the bottle, my ears and cheeks were a little flush.

Brandon commented on the yeast in both the smell and taste.  Aaron remarked on the warming alcohol finish.  And Wyatt said the finish was surprisingly tart.  He added that this was an "I'll just have one" kind of beer for him. 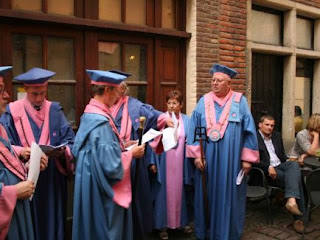