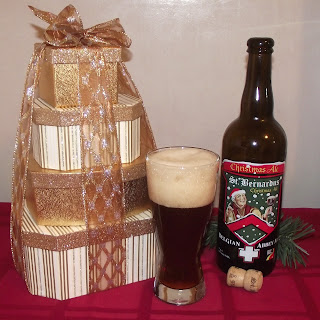 For the First Beer of Christmas, we pulled the cork on a big bottle of beer from Belgium.

My introduction to Brouwerij St. Bernardus came two years ago during our first Twelve Beers of Christmas.  Until this Christmas, I had not seen another style from St. Bernardus, so I was excited to pick up a bottle of their Christmas Ale.

The cork popped free of the bottle with a resounding thump and a strong aroma of malt and mulling spices filled my nose.  As the beer poured, a fuller aroma became apparent as sweet spice cake, dates, and cloves joined the bouquet along with a warm scent of alcohol.

During the pour, the head rose quickly with a thick mesh of tiny bubbles and stayed long into the drink.  The thickness of the malt and high carbonation led to a heavy lacing on the side of the glass.

The mouth feel is dryer than I expected due to the maltiness of the aroma.  There is an underlying sweetness of dark fruit and caramel that accompanies floral hops.  The spices come through with flavors of pumpkin pie and cloves.  The alcohol taste was less harsh than I thought it would be given the 10% ABV, but the warming effect was present in full.

This was a great beer to start The Twelve Beers of Christmas.  And a great beer to share. This year my beer loving friends Aaron, Brandon, and Wyatt joined me.  Aaron and Brandon commented that it was fruity with spicy notes at the end.  In addition, we decided to give the beers a rating.  We'll go from 1 to 12 (since it's The Twelve Beers and not The Ten Beers).  Note: it's not a ranking, just a rating.