For the First Beer of Christmas of the 2011 holiday season, we start with a style that I keep telling myself I don’t like.  The porter.  But somehow I keep liking every porter I try.  I guess I’m going to have to stop saying that.   (Side note … I also say this about brussels sprouts but on that count, that’s my story and I’m sticking to it.) 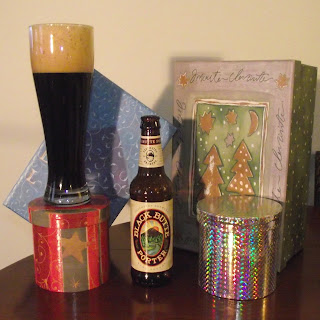 Last year’s Sierra Nevada Porter and Real Ale Coffee Porter were both very tasty.  And since Christmas last year I’ve racked up another couple of porters, but I have to say that the Porter Crown goes to Black Butte.  Not only is this the best porter I’ve ever had, this ranks among the best beers I’ve ever drank.

The beer pours with a dark mahogany color and a thick, aromatic head that clings to the glass leaving a light caramel lacing.  Now … why is lacing important?  Beats me.  But I keep hearing that it is.  What the lacing seemed to reinforce was the thick, full bodied feel of the beer.  It was rich and thick.  Not like motor oil, but like a strong and delicious coffee.   And the remnants clung to the glass as a reminder.  I kept turning the glass as I drank to pick up those left over flavors.

The roasted malt and hops compliment each other in both the taste and smell.  The flavors of coffee and caramelized sugar underwrite the hops and mild to moderate bitterness.

You won’t want to drink a six pack of these.  And you won’t want one after mowing the lawn.  But this is a great replacement for a cabernet sauvignon or other rich wine.  In front of a fire or just relaxing on the couch, this is a glassful of pleasure.

Stats
Brewer: Deschutes Brewery
Location: Bend, OR
Website: http://www.DeschutesBrewery.com
Style: Porter (American)
Alcohol Content: 5.2% ABV
Interesting Note: Deschutes offers classes at the Deschutes Brewery University. They teach everything from the culture and science of beer to topics like oak aged barrels and “extraordinary ingredients.” The first class is coming up soon (Jan 3, 2012) so get a reservation soon if you’re in the Bend, OR, area.
at 9:38 PM